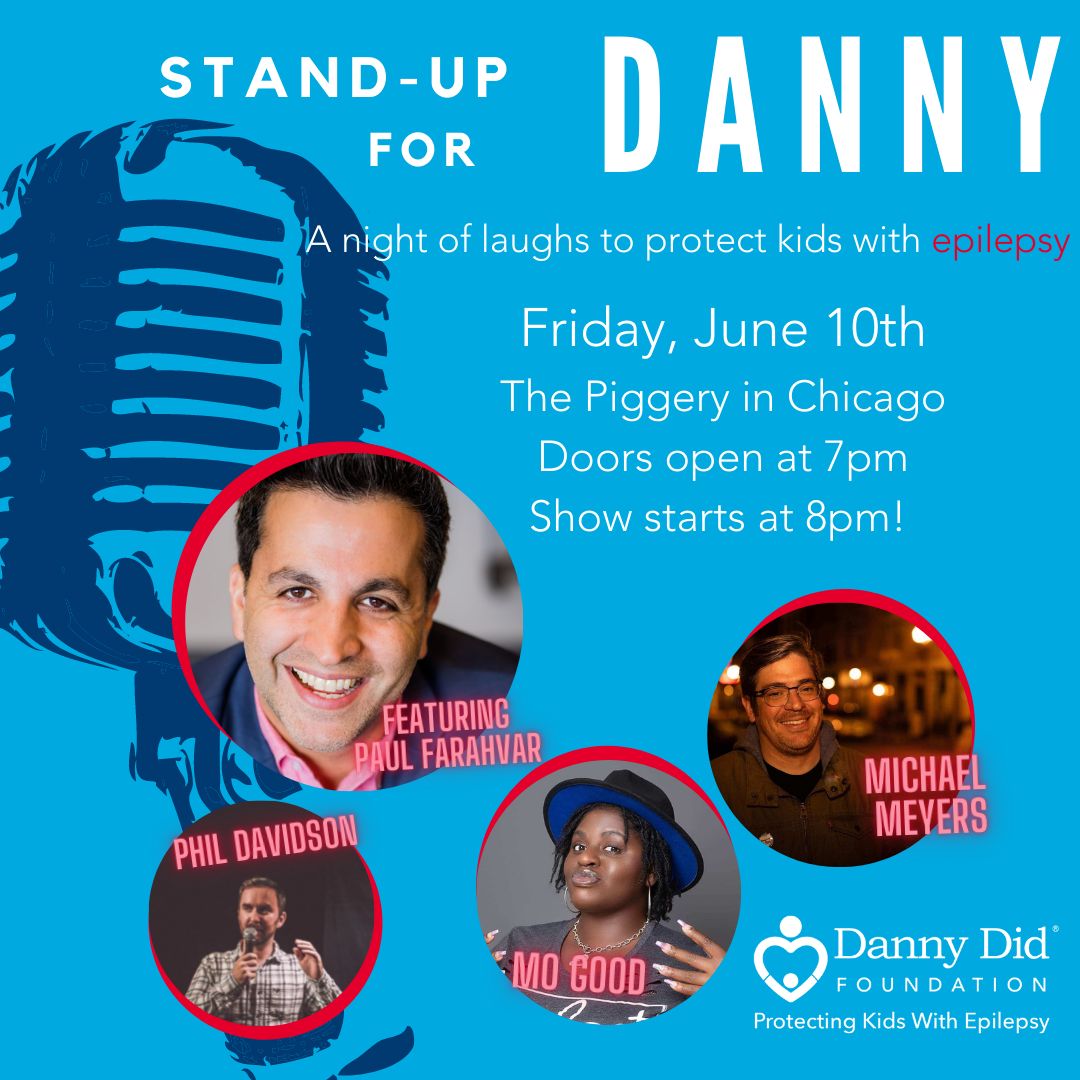 A Night of Comedy to Benefit Danny Did

Stand Up for Danny Comedy Night

We look forward to a night of laughter while supporting kids with epilepsy. The show will be hosted by Chicago comic Phil Davidson and the night will kick off with comedians Michael Meyers and Mo Good, followed by our headliner Paul Farahvar. (See bios below)

Tickets are available online only for this June 10th event. Doors and open bar will open at 7 pm, followed by live comedy at 8pm. Buy your tickets and invite friends before we sell out!

Please note this event is for guest ages 21 and older.

We have exciting raffle tickets as well. Winners do not need to be present to win.

Phil Davidson (our emcee): Phil has worked at the Improv, Zanies and other clubs around the Midwest. As a longtime friend to the Danny Did Foundation, he has produced several comedy events to benefit our cause.

Headliner Paul Farahvar: Chicago-based Comedian Paul Farahvar delights audiences with dry humor, centered on being a single son of disappointed middle eastern parents and a former professional. After becoming a regular at Chicago stand up clubs like Zanies, Comedy Bar and Laugh Factory, Farahvar was given the rare opportunity to host and produce his own monthly (now weekly) called "Drink Date Laugh" about dating and a comedic game show called "Everyone's a Lawyer", both at the World Famous Laugh Factory. He also regularly tours the country as a headliner and opening for national headliners Demetri Martin, Jen Kirkman and Gary Gulman. He was runner up in the Chicago Reader for Best Stand up Comedian in 2021.

Michael Meyers: a Chicago based comedian, Michael has travelled throughout the country doing stand up, including being a featured performer at the Limestone Comedy Festival. In November of 2020 he released his second album, which was a socially distant stand up experience called "From Afar". The album went to number three on iTunes, propelling him to be the nation's top bug noise comedian. His dry delivery and soothing voice will make for an experience you might soon forget.

Mo Good: Mo is up-and-coming female comedian from the South Side of Chicago. This mother of two has performed at comedy clubs all over the country including The Laugh Factory, Riddles and Zanies. Best known for her hilarious storytelling, Mo sheds light on the women’s perspective of life on and off stage. Hosting several events and working while working in Healthcare, this artist never runs out of relatable material.

About Danny Did Foundation

Founded by Chicago parents Mike and Mariann Stanton in 2010 after the sudden death of their four-year-old son Danny, the Danny Did Foundation’s primary mission is to prevent deaths caused by seizures. The Foundation advances public awareness of epilepsy and Sudden Unexpected Death in Epilepsy (SUDEP), strives to improve communication about SUDEP between medical professionals and families affected by seizures, and advocates for the mainstream acceptance and use of seizure detection and prediction devices that may assist in preventing seizure-related deaths. DDF has supported families across all 50 states and 14 countries.

Support us with a donation.